Here I am. I’m going to bare it all for you. Please, be gentle in your judgement. Seeing as it is Maternal Mental Health Awareness week this week and for the month of May, I figured, why not open up to an entire planet of strangers.

Mental Health has had such a stigma behind it for so many years…. I was diagnosed with depression in college. After D was born, I was diagnosed with anxiety as well. I actually went untreated for Post-Partum Depression after having him because I was so terrified of the repercussions of my not feeling 100% after having a baby. Things certainly have changed since then though. Now people talk about things – partially because of social media in my most unbiased opinion.

When I became pregnant with G, I stopped taking my medicine because I was told it was safer for the baby. Promptly six weeks after having him my baby blues turned back into PPD. Which in turn, turned into depression and anxiety.

I was able to get my meds back into control and I was beginning to lead a mostly normal life. And then I became pregnant with O. I once again thought it would be okay to go off of my medication while pregnant. And while pregnant, it was tolerable. But then PPD hit. And it HIT ME HARD. At one point I wrote the following to my friends and family.

I’d like to be open with my friends and family about something that affects between 11-20% of new mothers each year and I have struggled with each pregnancy. Post-partum depression/anxiety. Luckily, I’ve been able to recognize the signs and get the proper help that I needed but I know so many people struggle, not knowing what it is that they’re dealing with and why they’re feeling the way they are. This is my attempt to educate others and maybe help other moms out there.

My PPD started early this time around. After only two weeks home with my precious little man, I began to become engulfed by my emotions. At first I thought it was just the baby blues – mood swings brought on by your rebalancing hormones. Man, was I wrong. I think part of my anxieties were brought on by breastfeeding difficulties caused by his shallow latch, but things snowballed very quickly. OB likes to be held, he’s a very loving, snuggly and alert baby. All amazingly wonderful things, but not for someone with PPD. I would get instant dread the moment he began to fuss. “Does he want to nurse? That’s going to hurt. Does he want to be held? I have so many things to do.” My anxiety would spike before he latched knowing that the initial pain was going to be horrible. When he wouldn’t let me put him down because he just wanted love, my anxiety would spike again. I would be on the couch, holding this sweet, sweet baby and on the inside I felt like I was being swallowed by a black abyss. Things weren’t getting done around the house – and plenty of people tell you to just let those things go to the wayside and enjoy your new baby. I felt lost. I couldn’t clean, my other children weren’t getting the attention they needed and my feelings of anxiety were making everything so much worse.

Friends that were there for me throughout the pregnancy were now busy with their own lives. The silence was so LOUD. I felt abandoned. All alone in this sea of darkness. When I finally sought medical help, I was given a prescription and the directive to “ask for help.” So, I asked my friends. Many of them didn’t even respond. They didn’t check on me. They were gone. Some of them had never experienced mental illness like I was experiencing. Some of them had. But their silence spoke louder than anything else. So despite the fact that I had begun the medications I so desperately needed, my anxieties and depression were still there. I felt like I must not be a good enough friend, that people I love could just leave me behind so easily. Every day I struggled to feel like I was enough – enough for my husband, enough for my children, enough for my friends but mostly ENOUGH for MYSELF.

There is such a stigma surrounding mental illness in our society. Luckily, it’s getting better and there is more and more research and acceptance surrounding it. I was able to find the perfect balance of medication to get me through the silence of my friends, the confusion of my husband and the needs of my children. After two weeks and a dose adjustment holding my baby didn’t make me feel like I was going to die. I could enjoy the snuggles of my last baby. I could nurse him without feeling completely overwhelmed. There is still some radio silence from people I once thought of as my closest friends, my husband still doesn’t always understand the overwhelming emotions that can still engulf me on a bad day but I am in such a better place knowing I’m able to be present as a mom without feeling like my world is ending.

I hope that telling my story will help someone else. A new mom who is feeling the same way I did, a friend who doesn’t know how to be there for their friend that is struggling as a new mom, a husband who isn’t sure what their wife is going through. Mental illness is so hard in so many ways. Feeling like you are the worst mother in the world after having a new baby is probably the hardest part of it all though. If you’re feeling this way, you aren’t alone and there is help out there.

I will make this public so people can share … end the stigma. Let’s help each other.

It was so difficult to be open and honest with people about not feeling 100% after having a baby. But having a baby isn’t all rainbows and butterflies and unicorn horns. IT’S HARD. And so many new mom’s go into motherhood thinking they have to be perfect. Which is the farthest thing from the truth. You would think that people would be all about giving advice on how to stay sane during the first few hours, days, weeks, months. But instead it feels like a topic that gets swept under the rug. I say ENOUGH IS ENOUGH. 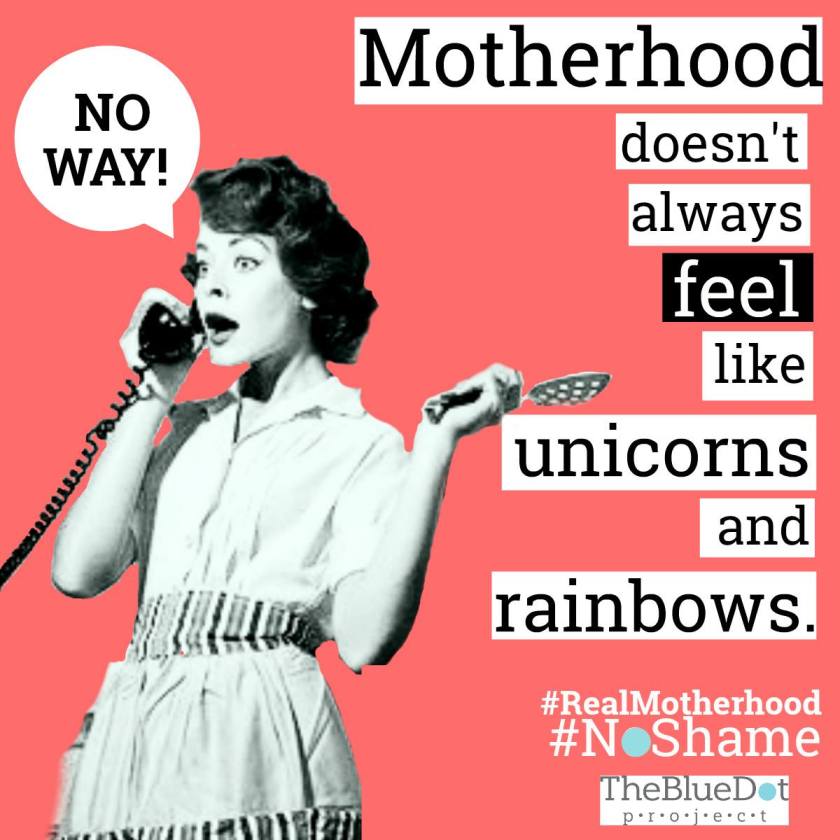 You can find ways to support them and mother’s trying to work through these issues through the Blue Dot Project’s website.
If you’re a mother – or know a mother – please join us this week. From their website:

For Moms: A #RealMotherhood 5-Day Challenge

Let’s end this cycle together.

4 thoughts on “Post-Partum Depression and the Every Day Mom”